～ From Takamatsu to Shodoshima ～ 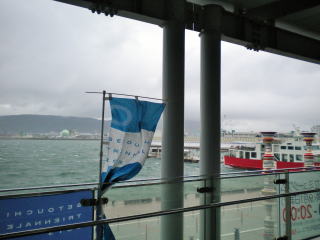 The first day of the journey, entered the Takamatsu flight from Tokyo, was scheduled that to Shodoshima in the high-speed ferry from Takamatsu Port. However, unfortunately due to the influence of the typhoon, When we arrived in Takamatsu, ferocious storm, such as close to a harassment.

It is not transmitted in the

photos, even blowing strong winds much that dangerous an umbrella, About Mamanaranai even cross the crosswalk. . .
A result, the high-speed boat that we had planned (about 30 minutes until Shodoshima) suspended service, at slow minute, high stability ferry, was was supposed to be over in slowly over a period of 1 hour Shodoshima. 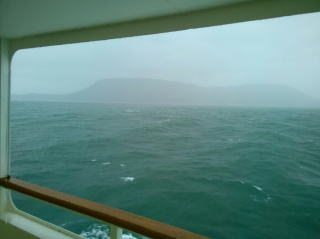 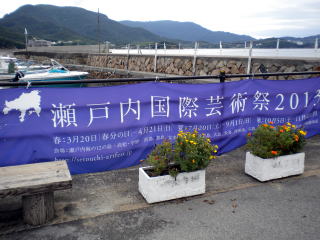 On that occasion in 2013, the entire Seto Inland Sea is completely changed to "Island of Art", it was also a holding year once global art event of the three-year "Setouchi International Art Festival (Setouchi Triennale)".
The Arts Festival to be held separately in the spring, summer, autumn and three seasons, the management people visited, was the period immediately after the closing of the summer period (7 / 20-9 / 1).

After landing, first, I came to Tonosho the city of gateway of Shodoshima. Tend located in the city, it looks like a river that was sandwiched between this embankment,,,

as in fact, "the world's narrow Strait", is Guinness certified "Hijiuchi (Tsuchibuchi) Strait."


By the way, the narrowest place is Toka'm 9.93 meters.
Incidentally, if you go to Tonosho office that is near, this strait for us to issue what will become cross certificate (one 100 yen). How in commemoration of curious person journey

Tonosho has been said to be known as "the city of maze" .
In the old days, islanders in order to protect themselves from pirates, is on purpose so he the whole town was in the intricate build like a maze.

, by the way, it would be what. In this sphere The object of the drawn mystery face? ? ?
By from the fact that it is placed on the roadside, a little emergency goods or of an emergency, or Hata also of elementary school summer vacation challenges of the? 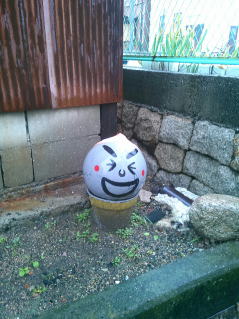 With a little walk, there, also there as well! On top of the bucket it has Nokka~tsu basketball-sized sphere, but he there anything the charm, what exactly? ? ? 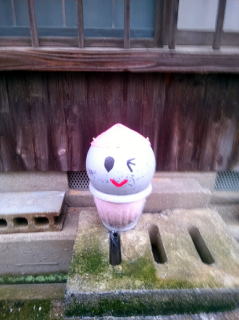 There also still. To have wink. Is it that this region unique talisman! ? 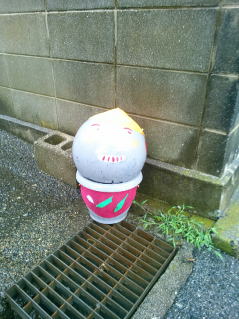 Some guy of innocent look, 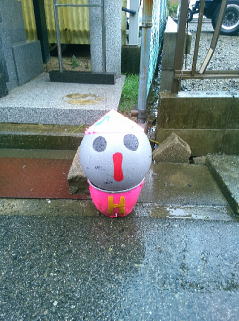 Like a work of Edvard Munch, some guy crying. . . 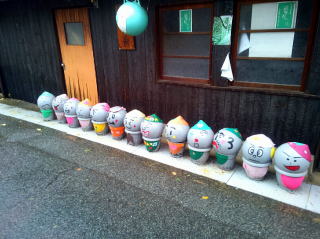 Remarkable is this. Guys continuing to house under the eaves. . .
Where not listed even guys of the guide book is any way in the mood, this evening, I tried to ask the hotel employees.

In fact, this, ish part of the art project, used to fishing By using the buoy (float), it is so's a "Jizo of Art" who local people has made in cooperation. 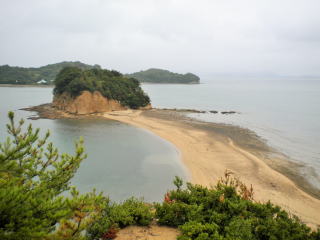 Out of the Tonosho then the headed is, this "Angel Road". It is said to be the angel of the promenade, the way of sandy beaches or disappear or appear with Ki ebb and flow of the tide.

This is the Angel located on the land side of the load, the view from the "promise of the hill observatory" that has been installed on the top of Bentenjima.

Unfortunately photogenic in Unfortunately the bad weather is not good enough. . . By the way photo is a state of two o'clock pm, but it is in the state which lot road width has spread in the low tide. 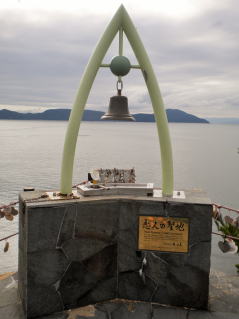 The observatory has a monument marked "Holy Land lover", and popular with young couples. The sound of the bell that visited lovers is played with great each of wishes, It echoed in the Seto Inland Sea. 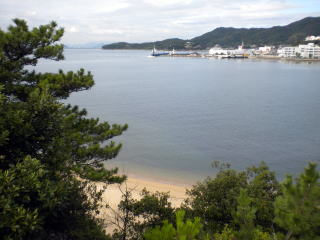 With views of the calm Seto Inland Sea and behind the mountains, you will indulge in very exhilarating feeling. 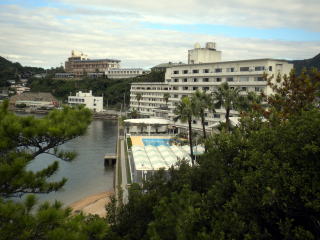 When slightly backward to look, you will see the inn "Shodoshima International Hotel" accommodation plan today. Angel is the closest hotel to the load. 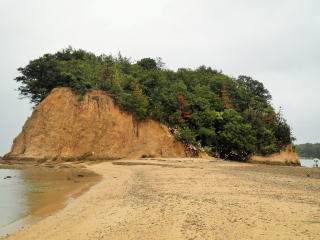 Well, let's across the Angel loaded down the observatory. Look forward to Chu-yo island. It does not seem angle, but the large and small some island in the back It has been continuous. 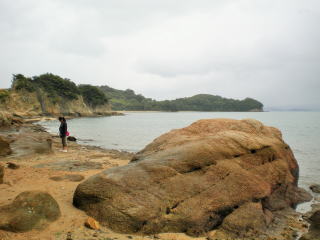 If we crowded around to the right side of the island, you can see the island is continuous to the back. The front is "small surplus Island", that extends to the next to the back, YMCA dedicated It has become a campground is "Oyojima". 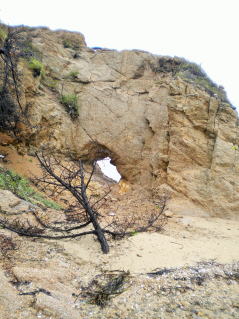 To Komu around the left side of the island, we went through in the gaping empty hole between the rock wall confronting. 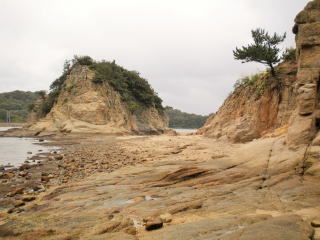 In such a feeling when passing on the other side, you look good in small surplus Island next door. The water reservoir of the depression of rock seawater drew is, to have a lot of small fish and crabs, it It is a great playground for children. While referred to as, with his hands janitor to catapult into the water, I have often returned to the child's mind.

to the Next Page of "Shodoshima & Naoshima the Excursion"