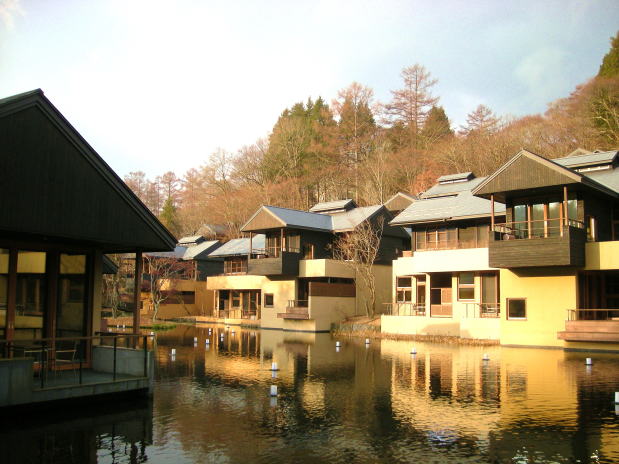 The side of a river which flows through the valley inserted into the hill is dotted with a countless detached building, and the whole place connected in the thin alley forms <the colony of a valley>.

Hoshinoya Karuizawa is the individual hot spring resorts incomparable to others which revived such also beautifully nostalgic original scenery of Japan from the new viewpoint united with the time.

It is also the eco-resort which carried out the maximum consideration to environment of supporting oneself by practical use of natural power sources including subterranean heat in 70 percent or more of the energy to be used. 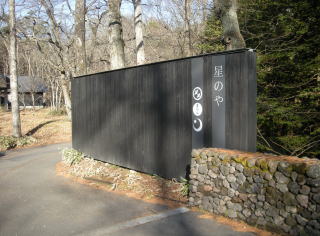 About 10 minutes walk from Naka-Karuizawa station,The sign display of Hoshinoya appears in the neighborhood containing a little national highway.

An overseas high-class resort hotel may try to be available for installing the sign which projected the image of the hotel in this way in the institution itself and a little distant place. 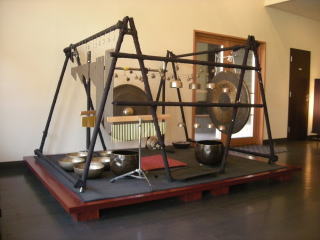 It is a reception building in the place included in the back a little that a visitor visits first.

There is not necessarily a registration desk in the extensive space on which the percussion instrument of Indonesia was placed like an object, and it just said that it was at the entrance to a vast site, or the relay point to accommodations. 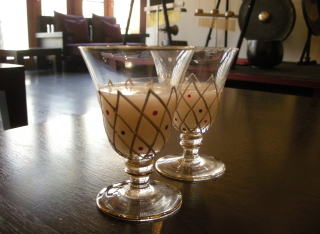 It is the procedure of check-in, sitting on a sofa and taking a welcome drink.

Boarding to the hotel private car from here , the staff guided us to outhouse that we stay in. 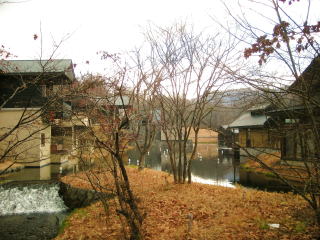 It is arrival several following-by car-vast site minutes in the mountain village dotted with a detached building, listening to a receptionist's explanation. 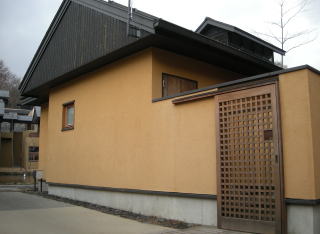 Furthermore, to a detached building of relevance of the point which entered, an alley is brought with a private car and a load also carries it in in the room.

The entrance of the building of the ground plastered wall style, and a lattice like reverse side Kido. Although it is a little simple touch, if the terrace suitable for the waterside is judged a <front stage>, is this the structure which gives a nod of assent somehow on the back side? 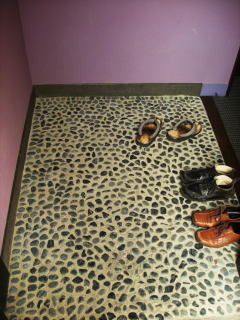 The entrance which mekes feel nostalgia.

There is also no level difference to the interior of a room, and it feels barrier-free consideration. 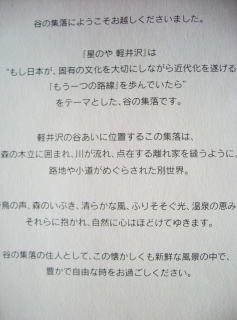 The message placed on the table.

It may be an unexpectedly important thing which means giving the hint for telling the concept of a hotel clearly having a substantial visitor, and passing. 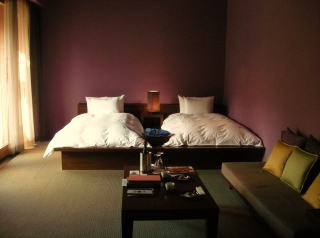 It is a purple wall to have gone into the room and to have gone into eyes first.
The tone of exquisite <sum> is made to the dangerous color which will change an image greatly if it makes a mistake one step of being purple.


Since this room is only that example to the last as there is a countless variation in free, and the color scheme and room arrangement of interior, it is a sake of a sense... 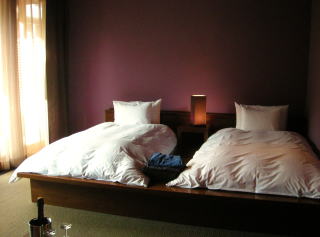 They are not a bed but the bedding placed on the platform, that is, Japanese style modern touch. 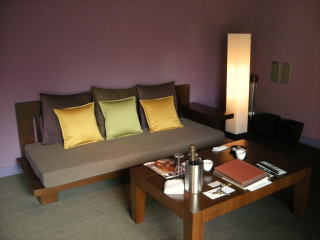 The sofa with a large bearing surface which can relax in various postures.

It is the comfort which a floor is a carpet like hemp weave, and he wants to be in the moderate uneven feeling with bare feet all the time, and becomes.And it is a floor heater. 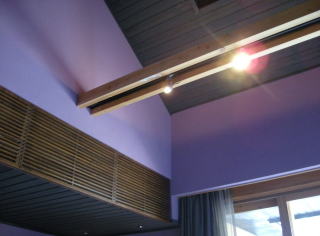 The spotlight illuminated from the crosspiece which crosses a high ceiling.
It seems that it is required even if that it is not too bright backs up the atmosphere of the room on the contrary. 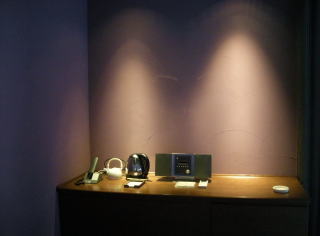 One corner of the room is equipped with some CDs with stylish CD player.

The toilet space unified in the same tone as the room.

The floor heater is contained also in the passage until it incidentally results here from the room, so comfortable. 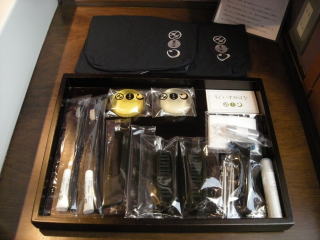 It is an accessory case of width arrival that is visible to the photograph upper part, and it can come and is considerably awesome. 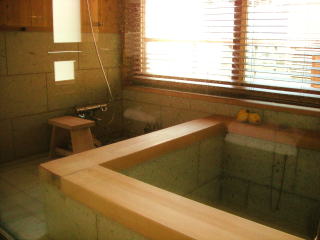 The bath which combined the Izu stone and the hinoki.

Textures are quite high although the width is so so. 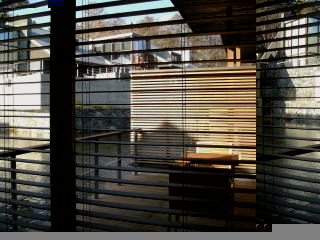 A terrace can be seen over wooden blinds.

If a blind is raised with all its might upwards and a window is opened, it will be open-air bath feeling mostly. 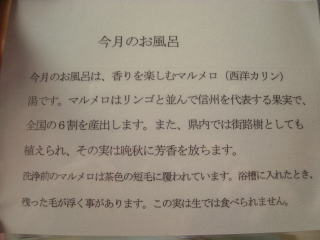 The message which was in the bathroom. 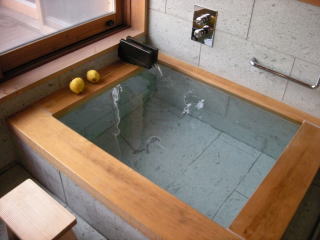 The bathtub which filled hot water.

The quince that the yellow object on a par with the edge of a bathtub will emit perfume if it puts into a bath.
A window frame feels wooden, that is, the prejudice to details. 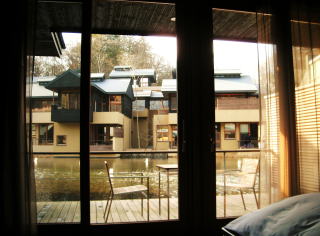 The detached building house on the other side looked over a terrace.

In the window of the room also a profound feeling wooden frame, the height of nearby 3m. 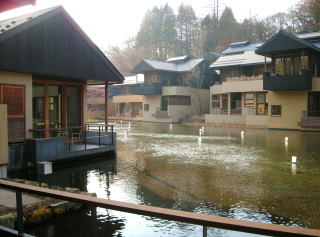 The view from the terrace.

Floor plans and parentheses, placement angle of the building is different because the subtle, landscape rich in change is attractive.

The countless white object floating on the water surface of a front river.When this becomes night, it is a paper-covered lamp shade in which a light is set aglow. 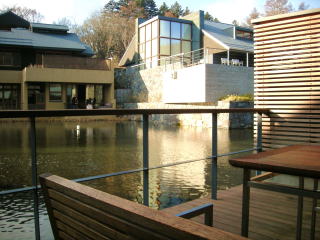 This room of the type <the Room of Mizuba>.

It's about 30 cm from the wooden deck of a terrace to the water surface of a river. It is just touch called the colony of the waterside.

to The Next Page of Hoshinoya Karuizawa