It's about 800 km from Bangkok to south. Krabi sea national park where untouched nature remains.

The five-star resort of the unexplored region which it is surrounded by the southernmost end of the peninsula and the cliff on which a limestone rises steeply, and can be accessed only by ship.

The site as vast as 100,000 sq m facing the sea is dotted with the villa of 2 stories, and east and west become that it is likely to be overwhelmed by the dynamic scene which the surrounding nature weaves.

Phra Nang beach where the cliff like the huge wall rises steeply.

Accessible only by ship.It's a big appeal of Rayavadee. And the onley location to get to the scenic beach on foot. 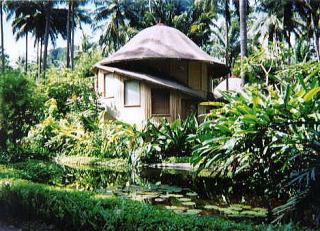 The villa of 2 stories with which the rich green site where a coconut tree grows luxuriantly is dotted and which is called a "pavilion."

The appearance is a peculiar style like an expeditionary party's hat or like a mushroom.
Although I am sorry for no photograph to be, a swing-type sofa is hung from a ceiling by the living of the first floor, and, in the appearance called a bedroom and a bathroom, the second floor has become the same unique structure. 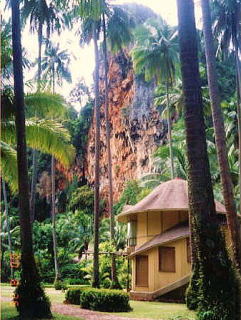 Since the circumference of the site is surrounded by the cliff, a thing like a feeling of an isolation with the exterior is felt in a good meaning.It may be feeling important as an element of a hiding place resort.

Incidentally, Krabi is also a famous place of rock-climbing, and also saw many figures of the young men who challenge such a cliff.

The pool like a watering place which was able to be cultivated in the jungle.Also behind the pool surrounded by the coconut tree.

I think that the charm of Rayavadee was conspicuous is in the uniquely matchless conditions of location which brew unexplored region atmosphere which is surrounded by the cliff and was too intercepted from other worlds.

Moreover, the important element which cannot lack existence of Phra Nang beach where contrast with the water and the rock face which make Guilin in China dim impresses grand natural dynamism strongly to this resort, either.

A surely fresh impression will be given to the direction which got bored with the common beach where sands continue for a long time.