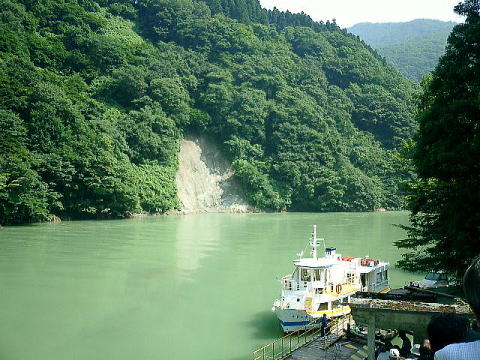 It takes about 4 hours from Tokyo to Takaoka,Toyama via Echigo-Yuzawa. And from there 70 minutes by bus, furthermore 30 minutes by ship.

Omaki Onsen is unexplored Ryokan which seems to stick to the cliff on the banks of a dam lake.

The Hot spring of Omaki Onsen has the legend of Ochi-musha (Fleeing survivors of the Heike clan as a result of losing to the Genji clan about 800 years ago.)

Some of them escaped to this area, and discovered the hot spring gushing from the lake shore. It's told that they healed their wound with the Onsen. 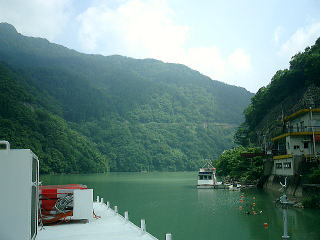 In the way that Shogawa-river flowing through from the north side of Gifu to Toyama Bay, the voyage to Omaki Onsen starts at Komaki which is near the dam. 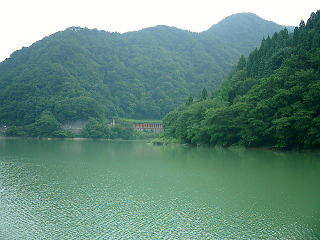 Surrounded by mountains, the ship goes advance the calm water of pale green.
In the past, there was a village around here. But now it's in the bottom of the lake.

The completion of Komaki dam in 1930 made the village sink to the bottom of the water.
On the other hand, Omaki onsen have been left between the surface of the dam lake and the cliff behind.
The reconstruction with taking the Onsen source again from the bottom of the lake made the basis of the current Omaki Onsen. 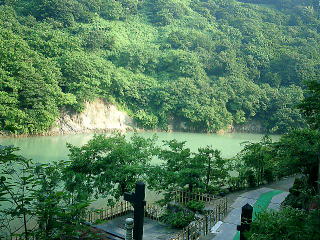 Cruising for about 30 minutes through the scenic gorge.

From the pier it's the steep slope up to Omaki Onsen.

The roadside signboard says "It's better not to go out at night since wild animals such as bears, raccoons and foxes is often infested." 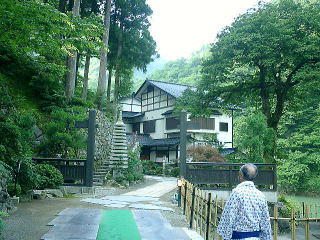 Climbing the slope up, the building of Omaki Onsen came into view.
Both sides of slight flat field, the valley side and the mountain side are also quite steep slope. 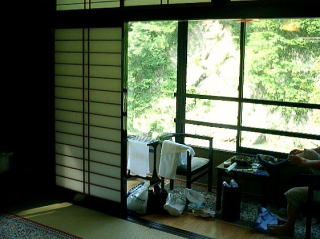 Of course the guest rooms are Japanese-style on tatami floor. 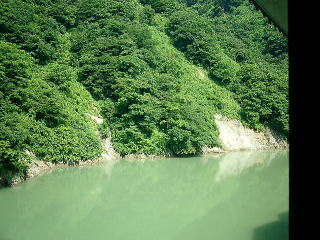 Outside the window, the surface of the lake is spreading around. 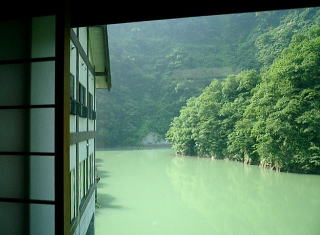 The protruding room on the surface of the lake is as if like being even in the cabin of the cruise liner.

It's likely more than 10m from the room to the surface of the lake . If you hang the fishing line from the window, it must be big catch! 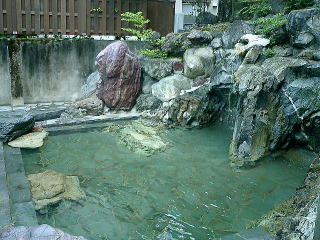 Here is the open-air bath behind the accommodation building. 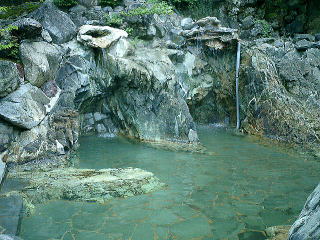 Hot spring which source temperature is 58 degrees is weak alkaline, and has slightly smell of hydrogen sulfide. 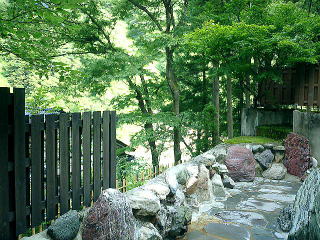 From the bathtub for men surrounded by virgin forest you can only glimpse the lake.
But the bath for women located above the slope has breathtaking views of the gorge.

The attraction of Omaki Onsen is just the unique environment such as the isolated island.

The rooms, strange feeling as if in the cabin of cruise ship which anchored in port of call. It will give you the strong impression that unforgettable.
The inconvenient location will bring you unusual comfort.

Omaki Onsen does not have any extensive facilities, but it has great charm such as luxury hideaway resort in the world.