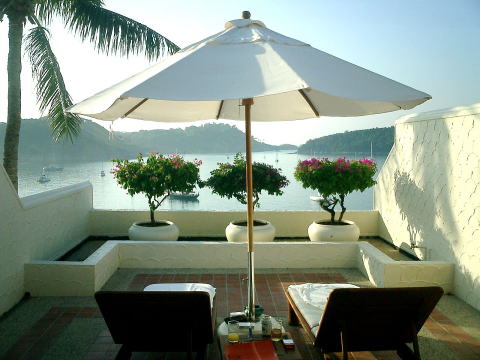 The royal Phuket yacht club built on the slope of the surface of a mountain which overlooks the southwest end, the beautiful Nay Hearn beach, and Phromthep Cape in Phuket.

Though the owner has changed several times since the commencement of business in 1987, it is a long-established store luxury hotel of the all-rooms ocean view which inherits the graceful figure which is not different from that time soon. 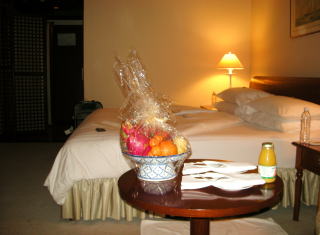 As a result of missing the airplane from Bangkok on the day of arrival, we checked in midnaight. Getting into the room, welcome fruit was set on the table. 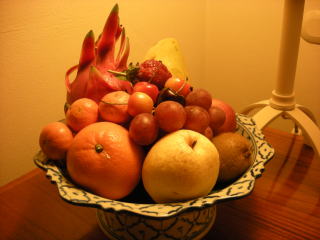 A bowlful of fruit. It's too much for only one night stay! 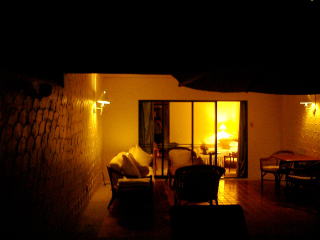 Although it may be visible like the interior of a room, it is one corner of this balcony. The roof is attached to the place on which the sofa is placed, and it has become wonderful space called the outdoors like indoor. It fell asleep as it is this night, looking at the star of a night sky here... In fact, although it is the 3rd stay in this time, it is comfortable space individually, so that it sleeps here each time. 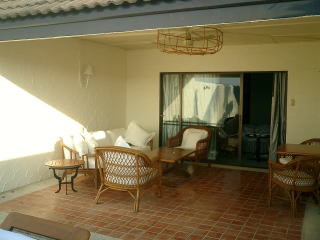 It is such touch in the morning.Width which is likely to exist at least by this one space.The feeling of the sofa made from a rattan and the floor of a terra cotta tone is good touch. 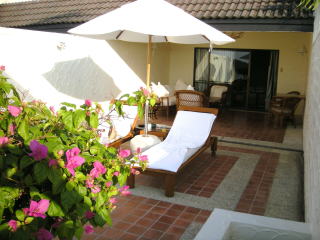 At the point of the space of a sofa, sunbed and a parasol further Although it is a room of the type the deluxe room with most rooms, there are what and 40-sq m width only in this balcony portion.Since it is called 70 sq m on the whole, is this one larger than the room as a matter of fact? 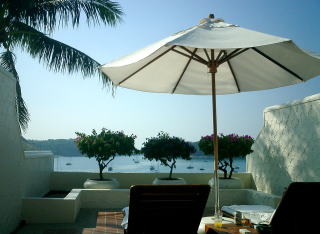 An angle is changed and it is the side opposite to. The Andaman Sea spreads out at the point of the patio with which the vivid plant was decorated. The height of the front enclosure is made low to the limit, and is it considered so that a field of view may not be interrupted? 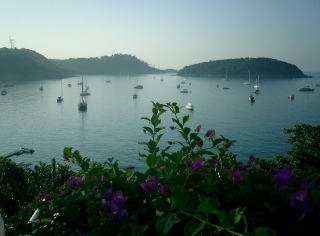 In the Andaman Sea under its view, the countless sailboat is at anchor. It is said that the 1st time of the greatest yacht race "Kings cup" in Asia was held in commemoration of King Phumiphon's 60th birthday by the commencement-of-business year in 1987 in this yacht club. 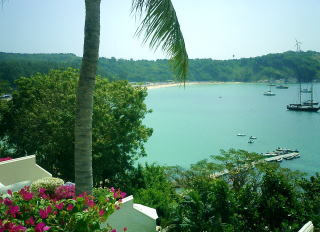 eyes shifted on the left, the Nay Hearn beach of a beautiful bow is visible to a distant view. 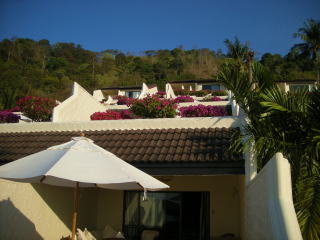 Incidentally, each part store is arranged in the shape of stairs along a slope, and serves as an ocean view with an all-rooms balcony as it is seen. 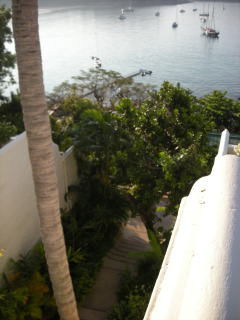 On the other hand, privacy is kept skillful, without saying that one wall separates and a neighbor's voice can be heard etc., since the passage is inserted into both the sides of every house.

to the Next Page of The Royal Phuket Yacht Club