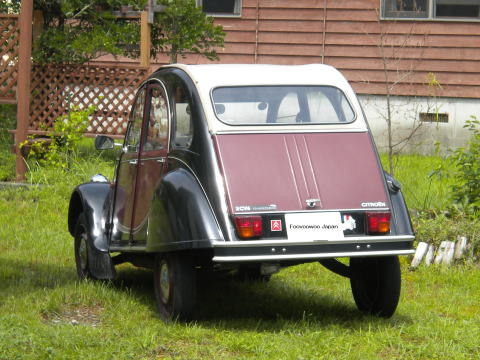 Citroen 2CV, how much people can image immediately for that ? If you know that's the car of France, but most people must say " What is 2CV?."

I focus what kind of car the retro France car of a peculiar form distinguished from this present age vehicle is really at that background, and regard from personal history to production stoppage as it summarizing and introducing.

A certain occurrence which the person of the second half of the 1930s and Pierre Boulanger that was the vice presidents of Citroen those days experienced became the cause for 2CV to be produced.

He sees the figure of the farmers who are still carrying the load with the handcart since invention of a car although it says that tens of years stand in the farm village visited by chance on vacation.

as movement and the means of transportation which he who was shocked by this spectacle can purchase also to people of such an agricultural area -- "-- making it required -- minimum -- " -- the feeling of duty that the car which fulfilled conditions had to be made ran.

It is said that he said to the chief engineer like this as soon as Boulanger returned from the vacation.

"Make what attached four wheels to the umbrella."

The concrete request put into this direct metaphor was as follows.Stack a 50-kg potato with two adults first, and gather the maximum spped of 60 km/h with the fuel consumption which is 20 km per liter.

Furthermore, a comfortable degree of comfort which cannot break the egg with which the basket was loaded by a bad road, either, brief structure which is easy to operate also to a woman, and operativity.And be cheap.

The design team which set about development that these severe conditions should be cleared advanced to the limit the weight saving which was a problem of the utmost importance.

1939 four years after this project that omitted Toute Petite voiture (very small car), and was named "TPV" starts,It has been wrapped in the war fire according [ having also cleared somehow the conditions which Boulanger presented, or / a moment and Europe ] to a great war.

The Citroen head who feared that a secret leaked by the confusion under wartime says that it has made most test vehicles dispose of at this time.
The development team still does not rest a hand and repeating various improvement, such as a cost cut and improvement in a degree of comfort, was continued under the water surface.

In Paris Salon in 1948 three years after the conclusion of war, that gave and gave the car's name of "2CV" instead of the project name of the original TPV, and this car made its debut with the utmost thing came out and carried out.The body as ultralight as 495 kg and the highest speed are 65 km.And the low fuel consumption wonderful as that time 22.2 km/* was realized.

It seems that however, the reputation of people who looked at 2CV for the first time in the hall was contrary to expectation, and it was bantered by "the child of an ugly duck", etc. and various expressions in if it is "the toy of tin" for the not unfamiliar strange appearance.

But when calling it the reaction of the farmers who were the main objects which Boulanger assumed at the beginning, the height of the economical efficiency and practicality was evaluated and the flow spread from the farm village in the suburbs gradually to the center of Tokyo, such as Paris, and 2CV grew up to the popularly-priced car soon received in people of a broad layer, and it carried out.

2CV then, sales began to ride to orbit, went constantly evolving such as improvement and increase of emissions, maximum power, top speed of more.
The different variations such as 4WD or van type was will be added on the other hand. It should be noted, 2CV I was able to keep the presence of unchanging as popular car even after Diane was told the successor cars to 1967 about 20 years after the debut was born.

When it comes to the mid-1970s soon, limited edition model of numerous individual will appear in the 2CV. Was announced at the Paris Salon in 1980, inter alia, "Charleston", by the response of the unexpected, should of 8,000 limited initially, did became a hit to the extent that it is a formal catalog model from the following year.

However, in the technical innovation of the whole, dramatically evolved car, such 2CV also carried out the difference with a performance car, while opening. Production in France was closed soon in 1988, and also production at the Portugal factory which succeeded it was also ended about 1990 at the last.

"If you take a photograph in Paris, the figure of 2CV is certainly reflected in somewhere."

National car of France that has been said so took down the curtain from the debut to the history also for about 40 years in this way.

Even now, in France, 2CV has left the deep-rooted fan all over the world from the first from the end of production for 20 years.In Japan, it also became the center of attention partly that Director Hayao Miyazaki of Ghibli had ridden, and it also appeared in the "Cagliostro's castle" of a movie and Lupin 3 world which was the first supervisor work.In addition, if a figure is occasionally shown as a movie, CM, a drama, etc., it is also existence like the player who begins to make comical and quiet air.

Probably, 2CV and others scattered all over the world is running about vigorously the road of the present age still fixed, so that it did not become as compared with debut that time of 60 years ago, making the sound of a "chop chop" and an air-cooled engine.

"Sudare" for 2CV!
That's Why I Bought Such a 2CV
Funny Stories about My 2CV
Good Time With 2CV
2CV Photogallery