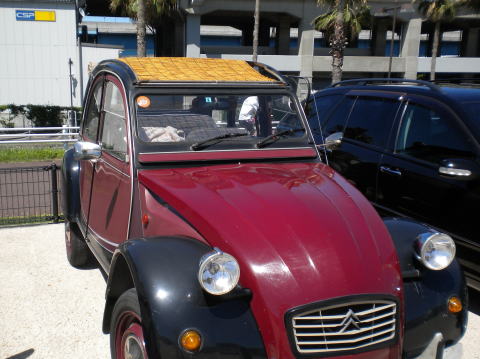 Heat measures named "Sudare (Japanese traditional bamboo blind) top" of the summertime is already becoming the common sense among 2CV owners in Japan. I challenged it by watching and learning some information from other people for the first time this summer.

At first I give priority to a point whether fix the appearance all right while referring to the example of various measures of other 2CV owners on the Internet without hanging money how and introduce the some installation example that came to play a role somehow.

At first "Sudare" which becomes the main body not to speak of what I purchased. There were unexpectedly various types of bamboo blinds and was troubled very though I looked in Sunday carpentry center, but, concerning this time first trial, I had for dogmatism and prejudice and purchased the following materials thought to be the safety. 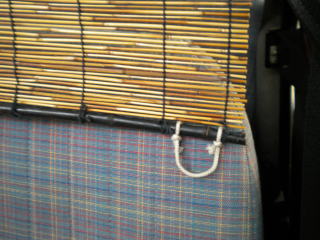 First cut a string of above「3」to suitable length and tie it to the both ends of the hanging pole of Sudare and make the ring such as the photograph.

Fixation of the roof front part 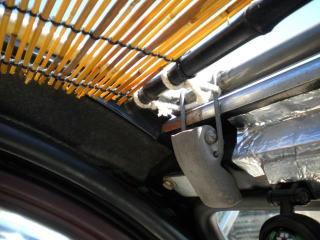 Let a completed ring come into the hook middle of metal fittings locking the upper windshield, a movable arm of the roof top at the last minute and I catch a hook on an arm and just lock it as usual.

As well as an original Sudare, it in this way becomes the form that two points keep the whole Sudare of the both ends of the hanging pole for surcharge.

But I had felt some uneasiness from a state when I drove later and was not seen with the photograph, but tied it to an arm through a string for the time being in the central part of the hanging pole

Fixation of the roof rear 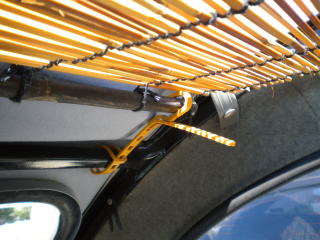 On the other hand, I used the convenient goods called "Band for hanging Sudare" for the posterior region of Sudare.

This product was a thing to use for the wash-line poles of the porch when I hung Sudare, but I chose the frame bar which in this case crossed the tail of the rooftop of 2CV to the wash-line pole and coupled the adjustable hook which I hung it and hung on the circle stick of the edge of bamboo blind through a band of the length like a photograph.

Because I can regulate how to hang tension, and the putting on and taking off is simple, this is considerably good.

Room after the installation:1 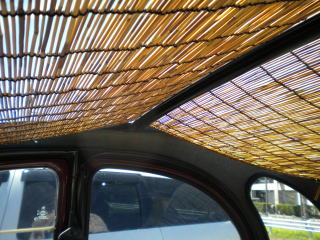 Because Sudare is pulled through the upper part of the middle frame bar by the front and the frame bar of the tail, put it away in the roof shape that had hollow a little that is different from the curve for the 2CV original mountain when it is, but can permit it personally; think whether is.

Still, it was what everybody pointed out in various WEB sites, but I realized that the size of the bamboo blind which I sold in the neighborhood adapted to a roof of 2CV wonderfully and have been effeminate unintentionally. It is a really mysterious car. . .

Room after the installation:2 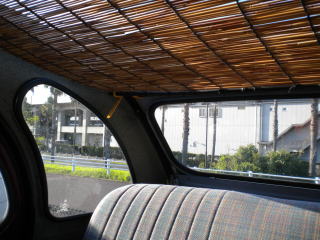 The feeling that is somewhat even in a beach house.

Appearance after the installation:1 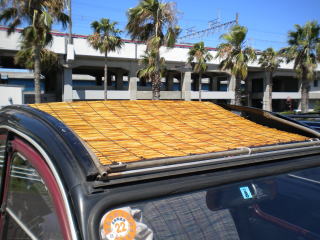 Seeing from the top, it looks such.

The desire that I want to get closer to the curve of the original roof is given.

but I thought and remained to go to the first purpose "that I did not hang money and time" this time faithfully.

Appearance after the installation:2 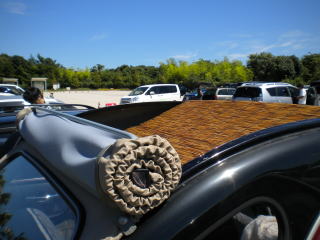 This is the appearance of the roof rear.

The feeling that became hollow more than front part. . .

But I rather thought whether it was good in this because this top could just cover up an original canvas top by just that much.

Look back on the work 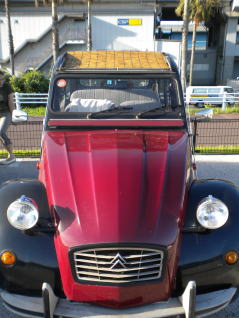 After all, this expense was delivered to less than JPY 800, and a working hour was just around ten minutes.

I think that I was finished as such smoothly than I worried.

But I think whether somebody will develop and sell most up-to-date style, a sunshade for exclusive use of 2CV with which the wind passes throuh and blocks the sunlight.

Of course I did not spend it in it if there was the air conditioner for exclusive use of 2CV.