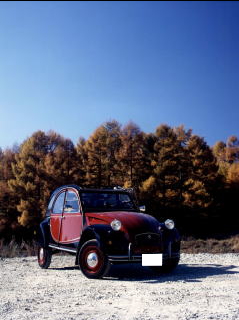 This photograph photographed Karuizawa during a drive.
The part which is a shameful talk, but buy this car, and rub against the right fender soon, and became dented; is considerably outstanding. 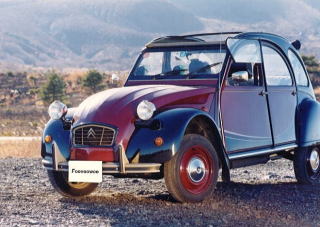 In fact, just after takeing this photo, a tire has gone flat of all things. We went by stop-and-go driving of 10km per an hour to call for help to the service station of the foot.

This is Karuizawa, too. One piece while I am buried among dead leaves in the forest of the dead tree just before dusk. 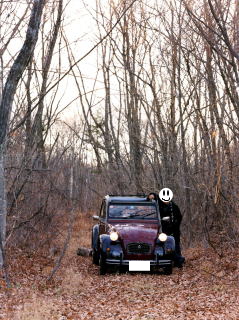 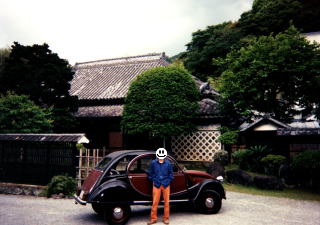 This is Osawa Onsen hotel (Yoda-no-sho) of Izu that I introduced in the page of the hot-spring hotel.

Will it be the place where I said even a nostalgic confrontation in front of the old building of the wall covered with square tiles and jointed with raised plaster?

In Kyoto, Arashiyama, it is one piece of the memory backed by bamboo forest.

Nestles on the grassy plain which a gentle mountain has in the rear.
It looks like a horse or a cow which is in the ranch somehow. 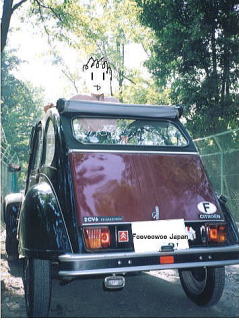 Up dressed in the back that raised up a canvas top.

In the yard of a certain lodging of "Ura-Bandai"in Fukushima .
By the way, I changed the roof from the normal black to the dark beige last year.

What is Citroen 2CV?
That's Why I Bought Such a 2CV
Funny Stories about My 2CV
Good Time With 2CV
"Sudare" for 2CV!